First let me say I am a fan of Gena and her Lords of the Underworld so I had great expectation about this book. I was a bit disappointed. Not that it was bad but this was more of an action movie story than paranormal romance. The constant fight between good and evil and never-ending inner battles.

Zacharel is on his way to lose his wings if he doesn’t change his path. He is ruthless and strong and somehow selfish in his way to destruction. But when he meets Annabelle he doesn’t understand the appeal at first. But the more time he spend with her, the more he understand why are humans important and precious.

Annabelle is a strong girl who is falsely accused of killing her parents and put in the mental institution, because no one believes her there are monsters (demons) walking among people. She suffered so much but came out stronger. I like my heroines strong and that they are not always damsel in distress  in need of a great hero. So I liked that about her, that she took care of herself despite the circumstances. When Zacharel shows herself to her, some things finally make sense to her and she is ready to leave the hospital asap.

Be prepared for one hell of a ride. Full of action, suspense, good and evil, dramatic twists and happy ending. But it seems like the author is trying to push through some moral purpose. The plot was ok, but nonstop action is not realistic. There is almost no real romance, it is quickly build with little suspense and very little sex.  Those scenes are also  vague and plain. There is no real sexy time and passion as in LOTU. So I was disappointed in her writing and different approach. 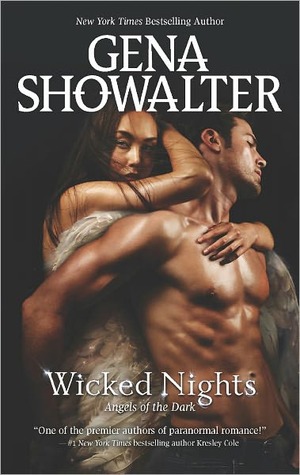